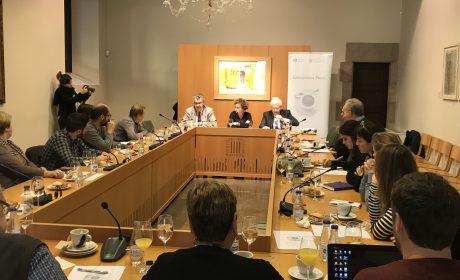 Throughout the meeting, the way in which the political culture of vertical hierarchies contrasts with the concept of public diplomacy and governance was discussed, as was the the way in which Catalonia is evolving towards a more inclusive, horizontal and meritocratic model from the cultural realm.

An evolution that, despite having taken place during times rife with political uncertainty and tension, is still capable of generating spaces in which different cultural, political, diplomatic, journalistic, academic or feminist actors can build ties.

Mascarell explained that, despite there being insufficient and scarce resources, we can work towards building a new approach that overcomes the limits and impositions of traditional actors who perceive their social, cultural and political hegemony to be fragile.

Culture is an increasingly relevant tool when it comes to understanding the new soft public diplomacy and to rethinking the new institutional, state-wide, national, and governance models. These new models and actors are being called to replace the old bureaucratised ministries of opulent buildings.

Ferran Mascarell i Canalda holds a degree in History from the University of Barcelona and has always had ties to the cultural management world in both his private professional career and as an elected politician. He was the editor and head of Avenç, a history magazine, from 1977 and 1984 and was the head of and coeditor of Saber magazine from 1980 to 1983, the year in which he also became one of the promoters and the first president of the Associació de Publicacions Periòdiques en Català.

In 1999 he was named Councilor for Culture by Barcelona’s City Hall, a position he held until he became the Catalan Minister for Culture in 2006. He was head of the ministry during Artur Mas’ presidency from 2010 to 2016. From early 2016 to October 2017 he was a delegate of the Generalitat in Madrid.