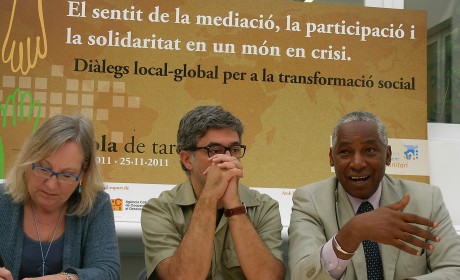 FOCIR launched a series of breakfasts, inviting along the media in order to promote international projects related to current affairs under way in Catalan civil society.

These FOCIR breakfasts were meant to raise awareness of the rights and responsibilities of Catalan organisations with regards to international relations, as well as to promote and showcase their work. Each of the breakfasts gave a voice to one of the member associations and was the perfect occasion for them to explain a little more about their international projects, the type of agreement and relationship they have with their respective international networks and to promote a relevant person within the international arena who could explain their experience and knowledge on a specific project.

FOCIR members are ambassadors for civil society abroad and so it is important we raise awareness of the work they carry out and promote meeting points with other individuals or associations participating in foreign relationships. In this kind of situation, the media provides an essential role in improving the visibility of the Catalan network of associations, something which can often be a challenge for the over 200 Catalan organisations with an international presence.

Breakfast with the World Democratic Governance project association (WDGpa): toward a parliamentary assembly at the United Nations

The World Democratic Governance project association (WDGpa) is a Catalan organisation which is associated with the World Federalist Movement (WFM) and member of FOCIR which launched the UNPA campaign (campaign for a United Nations Parliamentary Assembly – world parliament) on 5 March in Catalonia. The official launch presentation, which was held at the Pati Llimona in Barcelona, fired the starting gun for a campaign intended to give a voice to citizens on a supranational level.

FOCIR, for its part, wanted to support the campaign and so organised a breakfast for journalists on 5 March just before the official launch.

Breakfast with the Fundació Desenvolupament Comunitari: the importance of mediation in a world in crisis

The Fundació Desenvolupament Comunitari (FDC) held its Autumn School between 21 – 25 November. The school was a place to reflect on everything to do with community organisation, citizen participation schemes and mediation in crisis situations. In this framework, the FDC invited experts of Guinea Conakry and Colombia, two countries ravaged by very serious conflicts, where networks of 250 mediators and almost 150 community leaders have been organised thanks to the help of local organisations with Catalan support.

FOCIR wanted to mark its support for the meeting by organising an event with representatives of the organiser and experts from the two countries on 23 November.

Tarragona played host between 1 – 4 June 2011 to the Junior Chamber European Conference which was organised by the Junior Chamber International Catalonia (JCI Catalunya) with the aim of bringing the international branch of its organisation here to our country. In order to promote the work they are doing and as part of the different congress events, on June 1 2011 FOCIR and JCI Catalunya jointly organised a breakfast with the press.

The second breakfast was held in conjunction with COCAT to raise awareness of the International Volunteering Congress in Catalonia which took place between 1 – 7 December 2010. Those invited to the breakfast had the opportunity of chatting to United Nations, UNESCO and CCIVS (Coordination Committee of International Voluntary Service) volunteers.

The first edition took place on 6 May 2010 in conjunction with PEN Català, and welcomed Sihem Bensedrine, a Tunisian journalist who had been forced to leave her home country and was welcomed to Barcelona as part of the Refugee Writer Programme. The event also saw the presentation of a report sent to the United Nations which documented and denounced the anecdotal use of Catalan in the Spanish Justice system.