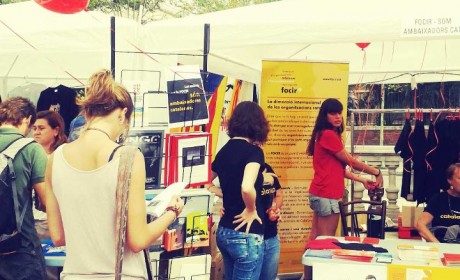 FOCIR attended the 11th edition of the Catalan Countries Organisations Fair which took place on 11 September. The fair offers a wide display of all of the current work and projects involving the Catalan nation, its society and research on its individual and collective freedoms.

Throughout the whole day, FOCIR offered visitors to the stand information about its member organisations, with special emphasis on the work they are carrying out to represent Catalonia beyond its borders. From visitors also purchased one of our “I’m a Catalan ambassador” t-shirts, publications by FOCIR or other information from one of the internationally recognised organisations. The stand was also an opportunity for us to raise awareness in conjunction with CIEMEN and the production company NIHAO Films for a documentary that will explain to the world the reality and demands of Catalonia.