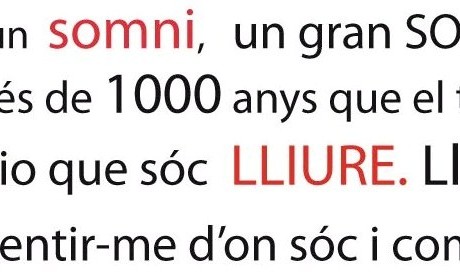 “The Catalan Dream” is a full-length documentary introducing Catalonia to the world: who we are and why we are like we are.

What is the “Catalan dream”? Key figures from Catalan society go deep into what the “Catalan dream” is and the situation of Catalonia in the 21st century from both a Catalan and Spanish point of view. It explains more about the situation of the language and social, economic and political questions with testimonies from those on the front line. These people help us look at and discover our own history and to understand the events which have put us in the situation we find ourselves in today.

The documentary explains what the dreams are the Catalans have for their own country. It will ask such difficult questions as how Catalonia will coexist with the Spanish state, the desire for independence for a sector of the population as a whole and the future of Catalonia within Europe.

The documentary, which aims to show both sides of the argument, includes different visions which will help non-Catalan viewers have enough information to form their own opinion on the Catalan situation. This “Catalan dream” has been purposely created to propel the Catalan situation onto an international level, but also to make those who know of or live in Catalonia rethink their opinions.

The documentary, promoted by CIEMEN, is being made with the help of the production company NIHAO FILMS and the support of FOCIR.