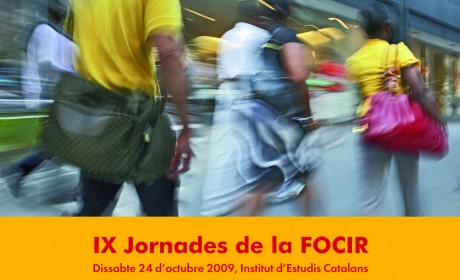 Catalan Internationalisation and the Media

The 9th FOCIR Conference was held on 24 October at the Institut d’Estudis Catalans, this under the name of “Catalan Internationalisation and the Media.” The conference, which welcomed some 70 participants including members of different associations, political groups and journalists, analysed the main challenges and advantages of promoting Catalonia abroad and discussed the influence of the media on this process.

The programme was divided into three round tables, of which the first served to exchange experiences and perspectives on internationalisation within institutional politics. It was headed by Jordi Fortuny of the Directorate-General of Corporate Outreach at the Catalan Generalitat, with a business perspective represented by Lluís Juste de Nin, CEO of Armand Basi and Aleix Clarió, Head of Communications at the CNJC (National Youth Council of Catalonia) who offered his experience from the world of non-corporate associations. The round table, in addition to the other debates, raised an interesting discussion on the two-pronged strategic approach of using the two brands of Catalonia and Barcelona.

In the second session, European journalists talked about their knowledge of the current situation in Catalonia and how they communicated Catalonia-related events and attitudes within their respective countries. Leo Wieland of the Frankfurter Allgemeine Zeitung was particularly critical and remarked how the image of Catalonia had been affected very negatively in the international press. Mark Mulligan of the Financial Times, however, recommended trying to counterbalance this effect by positioning Catalonia in the world via positive strategic elements and ignoring negative claims. Lastly, Ewa Wysocka of Newsweek Polska called for a closer relationship with Catalan institutions and also recommended improving self-criticism, as often it is people and/or companies themselves who try to hide their Catalan side.

The conference was opened by Àngel Cortadelles (of the Directorate-General of International Relations of the Generalitat de Catalunya), Josep Maria Pons (Representative of the Institut d’Estudis Catalans) and Mònica Sabata (President of FOCIR). Carles Mundó (Secretary for the Media at the Generalitat) and the President of FOCIR gave the conference’s closing speeches.

The degree of participation, the extremely high-quality speeches that were given and the debate that was generated around the three round tables help us reflect upon and identify our weak points and opportunities for improvement in terms of promoting Catalonia internationally. We at FOCIR are convinced of the need to be more self-critical, but also that of to look to the future, which is why we are now planning new challenges to continue promoting Catalan civil society’ work internationally and to contribute to the projection of a more positive Catalan image beyond our borders.