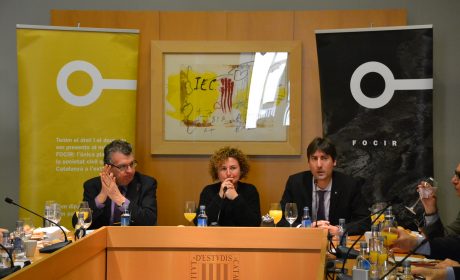 “The last two tragedies that took place recently have proven the need for a foreign affairs department at the nation’s service,” said Jordi Solé in his opening statement at the 3rd International FOCIR Breakfast. The event took place at the Institut d’Estudis Catalans in Barcelona. A sizable number of experts in international relations and public diplomacy attended the talk, as did civil society representatives. Àngel Messeguer, FOCIR board member as well as IEC member, intruduced the event and Mònica Sabata, president of FOCIR, moderated the subsequent debate.

Jordi Solé listed 6 areas where the Generalitat’s external action is focusing its efforts. The first is bilateral relations, that is to say, between governments as established by agreements. The second is multilateral relations; to this effect, the speaker stated that this is a priority when it comes to defending our interests. The European Union, Development Cooperation and Public Diplomacy are the other strategic areas that are being strengthened and promoted by the Generalitat.