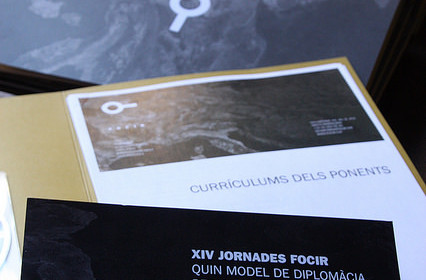 On 15 November 2014, the 14th FOCIR Conference – “Which Model of Diplomacy Should a Catalan State Adopt?” took place. The conference welcomed experts, institutions and academics from the world of international relations and public diplomacy.

The conference opened with a speech by Martí Petit, Phd, an expert in new forms of diplomacy, who gave us more information about strategies for digital diplomacy as a formula for success to help us orient ourselves successfully to the rest of the world as a future sovereign state. Well-designed tweet diplomacy could become a great way to turn new Catalan diplomats into communicative ambassadors. To paraphrase Josep Nye, who coined the concept of soft power: “Nowadays, in the information age, the one who will win is not the one who has the best army, but the best story.”

Up until now, the fact that we haven’t had the same interests as a state has meant that we have projected and shown an image to the world that is different to states practising conventional diplomacy (in the style of the old regime), meaning we should stop and think about what model of diplomacy we want to build together over the coming months. That depends a great deal on the model of country and state that we wish to build.

We often say that we are just a small country, although in reality, if we compared our population to the rest of the world, we would actually come in at number 100 of 194 states with official recognition. As a result, it could be a good idea to discover which countries are close to us in terms of size so that we can draw comparisons. Manuel Manonelles, of the Directorate-General for Multilateral and European affairs at the Generalitat, explained that Scotland had predicted the need for 70 to 80 offices abroad in a white paper, whereas Norway, which has a smaller population than Catalonia, currently has 1,800 people working abroad representing the country.

Our foreign policy will inevitably have to be aimed at attempting to join the ‘European club’, i.e. those who are in charge of the reins. In order to participate, we will doubtless have to accept the consequent and inevitable loss of sovereignty, however if we do this intelligently and with a good strategy, we will be able to better defend our own principles and values.

We will convert Catalonia into a modern state that is both European and adapted to the current state of affairs. Yet we must never forget where we come from and everything we have learnt from the years of resistance and from the construction of models for parallel diplomacy. Eduard Vallory and Vicenç Villatoro, who know a great deal about public diplomacy and culture and who came to the conference representing The UNESCO Centre in Catalonia and the Fundació Ramon Llull, left us with a few ideas which we here at FOCIR would like to showcase and share because we strongly believe that “the non-governmental world carries out and must continue to carry out its commitment to the global agenda” and that, in the future Catalan state, “the same way that we can make a virtue out of necessity, we can also make necessity out of virtue”.