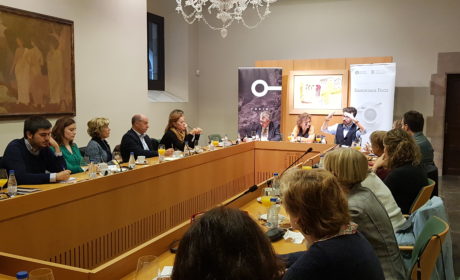 “Cities can use citizen diplomacy to answer to global and local problems.” – Arnau Guix

According to political scientist Arnau Guix, following the paralysis caused by the implementation of the Spanish Constitution’s Article 155, it is very important to diversify Catalan external action. At the 13th International FOCIR Breakfast held at the Institut d’Estudis Catalans, Guix reflected upon the need for coordinating instruments involving Catalonia in its entirety and that assist in implementing a joint city-based strategy.

Arnau Guix, a political scientist specialising in international relations, was the guest speaker at FOCIR’s 13th International Breakfast that took place on November 15, 2018. Based on his personal experience with global cities and local diplomacy, Guix went into detail on how cities have become essential actors in dealing with today’s biggest challenges, such as the fight against global warming, terrorism or in terms of setting the 2030 Agenda.

According to Guix, cities currently have – in contrast to the ability to use force and state sovereignty – a pragmatic and horizontal role that is centred on capital and talent flows. This all means that cities have a privileged role due to their ability to understand the direct impacts that globalisation has, but also because of their essential role when it comes to implementing measures to address these issues with a flexible room for maneouvre.

As an example of good practice when it comes to facing these local and international challenges, Arnau Guix cited both Finland and The Netherlands as references in terms of local diplomacy and multi-level integration mechanisms. Internationally empowered municipalities with joint strategies and tools so that cities can have a voice and be heard. Cities that make use of the synergies and advantages of the globalised world where local organisations weave alliances with other international, local, public and private actors.

As an expert in designing strategies relating to external projection and city branding, Guix has highlighted local diplomacy’s possibilities stressing the need to adress the lack of joint cooperation among local Catalan organisations where, despite the development of successful internationalisation plans, there is still no overarching coordination, which in turn leads to organisational disintegration that hinders the existence of coherent external actions.

Along this line, Arnau Guix has underlined the importance of incentivising sectoral networks and implementing new multi-level mechanisms. To summarise, “What can we do to do it together, how can we be more appealing and more efficient with less bureaucracy. This will be developed at the network-level. We must promote a debate around this issue so that actors that are interested in internationalisation can sit around the same table and discuss the topic.” Essentially, Guix argues that we need Catalonia-wide instruments that help create a joint strategy that allows for the diversification of Catalan external action that will last beyond political changes.

Guix also wanted to highlight local diplomacy not only as a collaborative tool between cities, but among all types of players. Multi-level diplomacy would therefore include players from various different fields to then generate impact on a global scale. These actors must be able to generate consensus and synergies that take advantage of both individual and group efforts so that cities can also incorporate citizen diplomacy as an answer to global and local problems.

Watch the recording of the discussion.