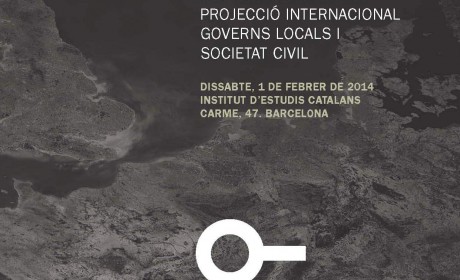 With spokespersons from the local Catalan associative movement and public authorities among the audience, the main topic of debate focused around the need for building a joint national external action strategy.

As part of the conference’s introduction, Teresa La Porte, an expert in public diplomacy strategies and in international communication analysis, explained the concept’s general context to the audience. According to her, “Cities are emerging as a global player within the context of the crisis of the traditional nation state. Although an increase in power on a local scale is clearly a fact, local power has yet to be fully accepted as a player on the international diplomatic stage”. We, therefore, find it necessary now more than ever to intensify our actions towards a public diplomacy strategy, with the understanding that the aim is to communicate at all levels.

Ronald Grätz, General Secretary of ifa (Institut für Auslandsbeziehungen – Institute for Foreign Cultural Relations) in Stuttgart, was a speaker at the first round table and emphasised the importance of intense networking to construct a “nation brand”. As an expert in cultural diplomacy and as a result of his extensive experience in German cultural foreign policy, Grätz insisted on the importance of sustainability and continued efforts to achieve good results, which can often take years to become apparent. This ties into the idea that arose at the beginning of the conference when Mònica Sabata, President of FOCIR, explained that “internationalisation should not be the result of rapid growth. It is about taking lots of little steps and not trying to run before you can walk.”

Francesc Morata, Professor of Political Science at the UAB, added that democracy is no longer centred around the idea of a state, but is now based on the interaction between lots of different players in public and private networks. It is within this new democratic context and institutional change that public democracy can really spread its wings – but only with an informed civil society that exerts pressure to change by providing different alternatives.

Jordi Bacaria, Director of the CIDOB (Barcelona Centre for International Affairs), made the closing speech at the first round table with a presentation on the different models of diplomacy and soft power that Catalonia could, and should, lead in the future. With these ideas firmly on the table, we opened the second round of presentations that were more focused on practical examples of cooperation between civil society and local entities working towards promoting Catalonia’s place on the international stage.

Click on the following links to see the full presentations:

1st Round Table: Public Diplomacy and a Country’s International Presence: The Utopia and Reality of Catalonia

Jordi Bacaria, Director of the CIDOB

Francesc Morata, Professor of Political Science at the Autonomous University of Barcelona

Joan Chicón, Head of the International Relations Service at the Terrassa City Council