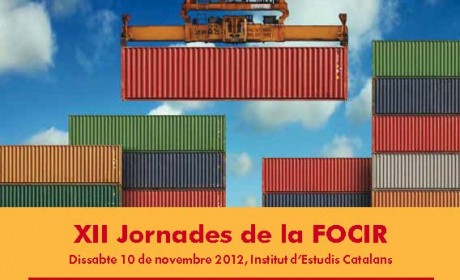 The 12th FOCIR Conference brought together economists and international experts to discuss the future of Catalan economic diplomacy. Recent political and social events have brought the viability of a future Catalan state to the centre of the debate and have shown that exports are the key. It is already a fact that Catalan society exports more and more every day. Data from last year shows that exports increased some 13.5%, a new historical record. Several surveys published recently, including one by PIMEC (Association of Micro, Small and Medium-Sized Enterprises of Catalonia), have also shown that as many as 81.5% of those questioned believe that an independent Catalonia would be economically viable. But what perspectives are there currently for Catalan economic diplomacy?

The conference which brought together the following experts: Guillem López Casasnovas, Lecturer in economics at Pompeu Fabra University; Elisenda Paluzie, Dean of the Faculty of Economics and Business at the University of Barcelona; Joaquim Llimona, President of the PIMEC Foundation; Joan Josep Berbel, Director of Invest in Catalonia at ACCIÓ; Jordi Martí, Councillor for Presidency and Territory at Barcelona City Council; Francesc de Paula Gambús of the Directorate-General for Foreign Affairs at the Generalitat – Catalan Regional Government; Jordi Quera, Vice-President of FOCIR; Huub J.M. Ruël, Lecturer at the University of Twente and expert in economic and commercial diplomacy; Mònica Sabata, President of FOCIR; Àngel Messeguer, Fellow of the Institut d’Estudis Catalans and Shaun Riordan, former British Diplomat and author of “The New Diplomacy” (Polity, 2002).