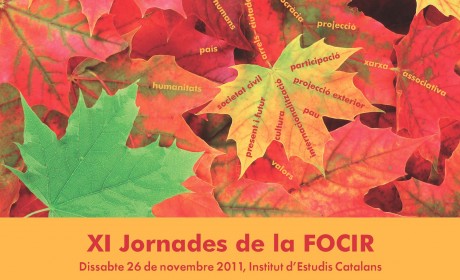 The 11th FOCIR Conference was held on 26 November 2011, this time under the name “Catalan Values: Constructing and Promoting the Country.” According to information published by the European Values Study at the start of 2011, Catalan society is becoming increasingly individualistic, demanding “tailor-made” values. Paradoxically, Catalonia has a long tradition of associations and of promoting and defending human rights. This tradition is, in fact, one of the country’s most important assets, and it is mainly carried out thanks to the work of Catalan organisations that are present internationally. At FOCIR, we wanted to know which are considered to be the most important values for Catalans and which are the values that Catalan civil society exports internationally. As usual, the event took place at the Institut d’Estudis Catalans and welcomed over 70 people for this edition.

The meeting was structured around an opening speech given by Ferran Sáez, Director of the Centre for the Study of Contemporary Topics, part of the Catalan Generalatitat, and two round tables. The first round table was called “Values in Catalonia”, and the second was “Catalan Society as an Exporter of Values”. Both sessions welcomed experts such as Enric Canet from the board of directors of the Casal dels Infants del Raval, Daniel Ortiz, Associate Professor at the Department of Social Sciences at ESADE and author of the book “Política i valors” (Politics and values); Josep-Francesc Valls, Professor in the Department of Marketing Management at ESADE; Violant Cervera, General Manager for Civic and Community Action at the Department of Social Welfare and Family Affairs; Ramon Vila, Secretary of the PIMEC Foundation and Margarida Serra, expert in education for development. The opening speech also welcomed the Secretary for Foreign Affairs of the Generalitat Regional Government, Senén Florensa, and the conference was closed by the Councillor for Presidency and Territory, Jordi Martí, and Mònica Sabata, President of FOCIR. The Councillor for Social Welfare and Family Affairs of the Generalitat, The Hon. Mr. Josep Lluís Cleries, gave a speech at the start of the second round table in which he explained the New National Plan for Values, an initiative of the Catalan government.