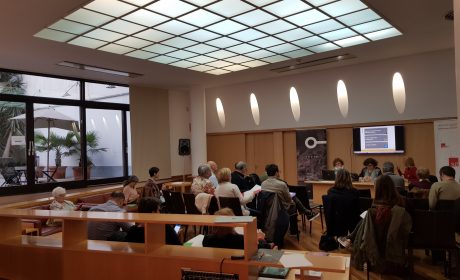 FOCIR held its 23rd General Assembly on March 28th at SGAE-Catalonia’s Social Club. There were over 30 attendees hailing from its various member organisations.

The event began with the approval of last year’s General Assembly’s minutes as well as this year’s agenda, after which Sergi Perelló presented the first part of the 2018 Report by going over the federation’s goals:

Following this, Mireia Plana reviewed the activities that were carried out in 2018 despite the continued effects resulting from the application of Article 155:

Mònica Sabata then presented the ambitious 2019 Programme highlighting the importance of actively resuming activities and searching for funding opportunities. The programme, which was approved by the attending members, will consist of:

The 2019 Programme also envisions increasing membership by 10 organisations so that FOCIR can grow as the only federation that encompasses organisations that do public diplomacy.